A small 2″x2″ square dark tintype photograph hidden away in an old photo album, upon restoration by Image-Restore, leads to a tale of siblings lost and lifelong friendships sorely tried by unforeseen consequences. 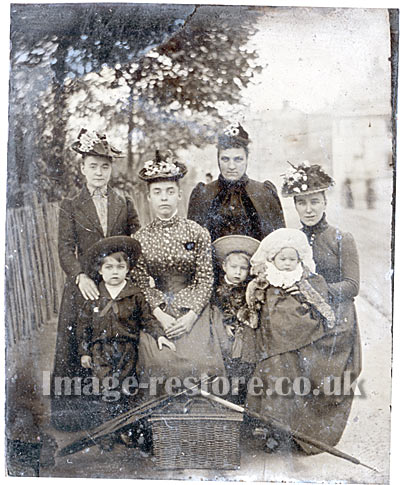 Their father died in 1898 and sadly all 3 boys had to go to “Carter’s boy home” in Clapham. It was only a year later in 1899 that both elder brothers were forced to emigrate to Canada via Barnardos on the SS Awawa in 1899 and SS Cambroman in 1900, but through the generosity of his maiden aunts that the youngest William Joseph Powell was taken out of care and fostered by Miss Baumann. (photo 1) ( which is somewhat poignant in light of the subsequent war as he was very close to her and she was of German ancestry). She lived at Dale road, Chiswick and he went to neighbouring Hogarth’s school.

Whilst at Hogarth’s and through joining the boy’s brigade ( Photo 2), he met and became best friends with a younger boy James Abbott, who lived in neighbouring 192 Devonshire road. Eventually, he also became the sweetheart of James sister, Minnie. This was to have unforeseen consequences in August 1914 after the outbreak of the First World War.

That month James and William had gone for a walk in Chiswick Park and came across an Army recruitment stall. James, being younger and somewhat headstrong, immediately ran across and volunteered to join the Army. William, with visions of James’s sister blaming him for allowing it to happen when they got home, felt he had no option but also join up there and then despite originally had no intention of doing so. The result was that both boys were enlisted into the 7th Dragoon Guards (photo 3), William serving in the machine gun section. Initially, William enjoyed being in the glamorous cavalry particularly as with his fine moustache he was considered to look the model of a cavalry trooper and as a result was painted by a number of the artists in the nearby Bedford Park community.

William Joseph Powell 13th MG Squadron – There are nine machine guns in the front row! The weapons are .303 Vickers Machine Guns, Belt fed and at the time had the smallest ”Beaten Zone” of any medium machine gun then in service in any military force. They were still in service in many places until the early sixties

However, being in the machine gun section had further unforeseen consequences for William. In 1915 the MG section was combined with those of other regiments, including the famous Indian Cavalry regiments the 20 Deccan Horse and 34 Poona Horse to form the 13 MG Squadron as part of the Secunderabad Cavalry Brigade. (Picture above)

In practice, apart from enabling him to speak Hindi for the rest of his life, this meant that William subsequently saw much more front line action than James and of a particularly dangerous nature. The MG corps was known as the “Suicide Club.” They would provide cover for new units moving forward, provide constant covering fire during attacks and would remain to the last when units withdrew, being “first in – last out”.  As a result, William saw near continuous action in most of the major battles including the Somme, the tank attack at Cambrai and the German and British offensives of 1918. The only major break he had was the 2 weeks leave when he married Minnie in May 1916.

Fortuitously he survived all this to be reunited with James and with whom he remained the best of friends for the rest of his life.

In the meantime, if anyone reading this has more information then please contact us and we can pass the information onto the owner of the photo.