Opportunities like this don’t come around too often. I had the honour to repair and restore historic images from the late 1890s of both these prestigious teams. Clapton Football Club was one of, if not the best team in the country at the time these photos were taken.  A select 11 were chosen to represent the club for the posed photo. There were 3 main photos posed for the camera. Two of the team shot in their strip and one in suits.  Mounted on heavy card and printed on fibre based paper and processed using silver-based chemicals, the quality of these photos was superb!  It isn’t until I have worked on photos like these do realise just how well the photographers did their job back then.  The photographers couldn’t just set the camera to a high ISO and snap away, they had to wait for good light and work with the subjects to keep them calm and still whilst they set up the camera and prepared for the shot.

The Clapton Football Club photo was posted with the team in their strip, which appeared to be black and white broad striped tops, which is, in fact, red and white. Notably, in the photo, there are only 11 men in stripes and today their team photo has 17 men ready and waiting along with goalies and many others.  Their shirts were tucked into their shorts which were high up the waist in line with the elbow and fastened with a webbing belt.  Shorts all above the knee.  The ball was heavy leather and made of around 10 leather panels wrapping from top to bottom and sewn into a ball shape. Shin pads were heavy duty and worn inside the socks.  With the socks themselves a little un-coordinated, all though all dark. 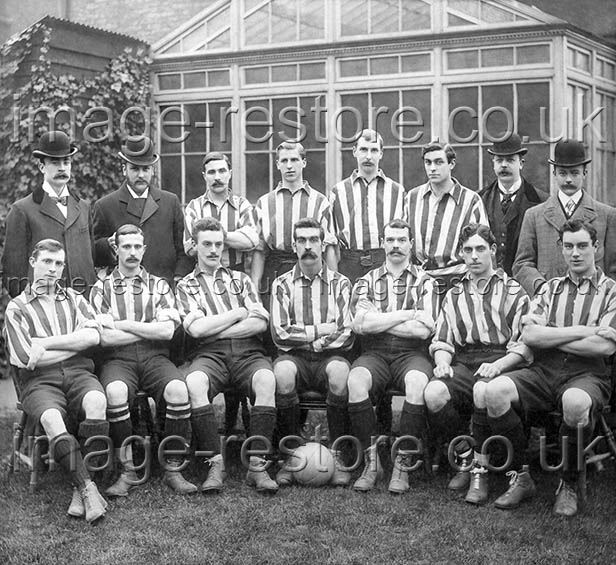 Contrastingly the Essex County team of the same year also posed in their team strip. 11 Men with their shirts tucked into their shorts, again level with the elbow but with shorts of varying length, held up with webbing belts, scarfs and scraps of cloth. Their socks looked like anything they could find, very un-coordinated in diamond-patterned wool and with shin pads on the outside. One chap wearing boots (far right in the picture) that looked a little like work boots, not football boots!

NOTE: Apologies, but due to copyright restrictions, I am only able to post small heavily watermarked photos.

The Essex Cricket Team shot was posed outside the clubhouse with hanging baskets dangling from the thatched roof, some children had jostled for places in the background so they could get in the picture, with one who snuck to a window as the shutter was pressed.  Heavy white woollen sweaters and thick white shirts with a dark cloth cap with cricket clubs emblem on the front was the attire.  Once again trousers were held up with silk scarves or cloth strips and their white trousers were turned up a couple of inches at the shoe.  Of the twelve men wearing whites, the only one did not have a full bushy moustache and he held a pipe, all other figures who were not children were men and wore suits and bowler hats.

The photo repair that was needed was to improve the contrast, remove the mildew spots that are a tell-tale sign of an old photo and to clean them of scratches and dust and grime that had built up over the last 120 years.

There is something to be said for this type of posed photo. These photos were not mass-produced, they were not taken with cheap throwaway cameras like today, they were taken with care and attention and were shot and printed using the best techniques of the period.  As a result, they have stood the tests of time.  In the throwaway society, we live in today photographs can be taken without the slightest thought and just mound up on hard drives and data storage devices, images without real meaning or value. Think hard when you take a photo, make it worthwhile and limit your shots, perhaps you will make sure you take that one shot that sums up what a week’s worth of happy snaps could never do.

If you are a Historian, Museum or Historical Society and are looking for some unique content or help with a project please see my Special Projects page for more information and how you can hire me.

Image-Restore – Photo repair for everyone!