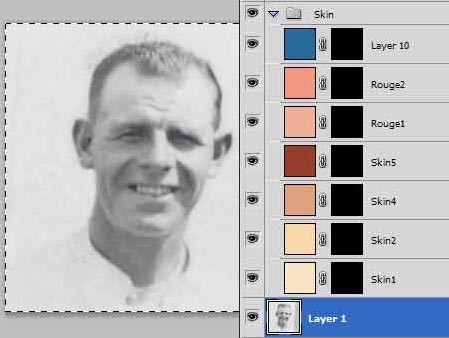 With the colour swatches obtained in the previous part, we can select a set of tones that will suit the skin of the figure we are working on. In this instance, I have simply grabbed a few to make a custom set to suit my image, but most sets will do.

You should initially create a layer stack of each colour in order from the lightest to the darkest. Each layer should be a fill of the plain colour with an overlay mode of “colour”. Set up a mask to “hide all” on each and every layer. Your image to be coloured should be on the bottom of the stack. 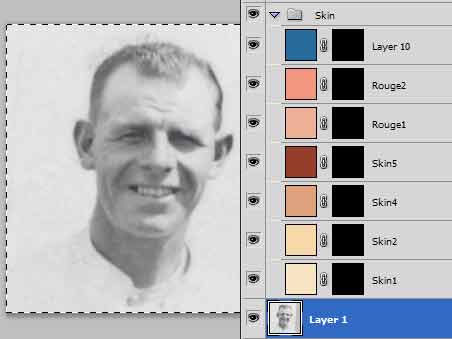 Colourising or tinting an old photo with layers

Starting on the paler tones and with a soft, white brush set to around 10 to 20 % opacity paint over the whole face on the mask layer. Avoid the eyes and lips, teeth and hair. On the next tone do the same but over the areas of next darkest tone, that’s everything but the highlights. Proceed through the layers like this, with the various tones as they get darker.

You can add reds for lips and cheeks and pink areas at the top of the stack. Paint the lips and add colour and life to those areas that may get flushed with red tones, perhaps where the skin is thinner on the face or in folds, on ears and around the eyes.

When you have painted them all go back to the bottom layer and adjust the opacity slider of each layer. The paler yellower tones should be fairly subtle and the darker tones may need a bit more encouragement to show through as shown in part 1. 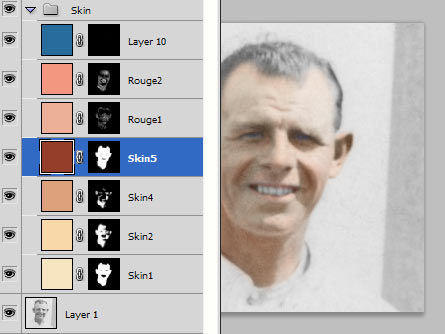 The above shows the final stack with one added tone of blue for the eyes. As this figure is one of many in the final photo the number of colours chosen for the skin was a mere handful, if it were a large image of just one face then many more shades and tones would be needed. Perhaps even some greenish blue tints as well for temples or necks where veins sometimes show through.

The dark brown coloured layer was set to vivid light which added some contrast to the dark tone whilst preserving the highlights and tinting to a darker shade.

The idea is you can adjust the layers as you see fit matching the intensity of each layer to suit the different effect or skin tone you are after.

Remember this is just one way to tint an old photo, there are others!

I have now added a video below to colourising or tinting an old photo The video shows fewer layers but each face depending on the final colour tone needed may require more.

If this seems all too overwhelming to do yourself anf you have a photo that needs colourizing stop by the colourizing a black and white photo page for information on how I can help.