Cycling in old photos shows us the way cycling has changed. I thought I would just peer into a few old photos and take a look back at some of the photographic problems, clothes and cycling technology.

Photography and cycling in old photos

Firstly back in 1900 exposure speeds were not that fast. If you went to an indoor cycling event, lit by natural light through windows,  it wasn’t going to make that much of a difference to the outcome of the photo. It is fair to say that everything that moved would be blurred. Unfortunately, in capturing the thrills of indoor cycling all you would get is an empty track! 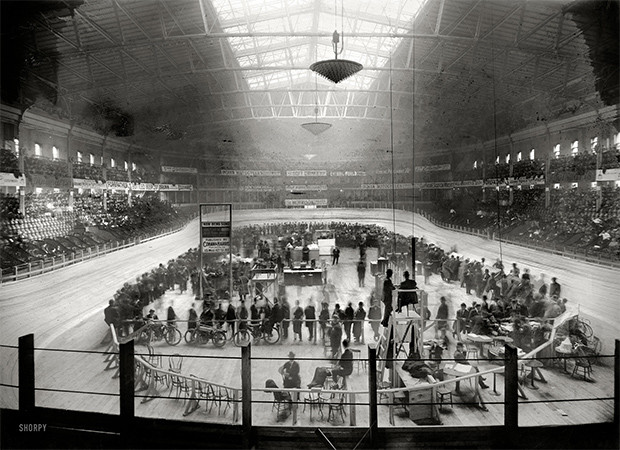 The image here from Shorpy.com shows no riders on the track. Some bicycles can be seen in the bottom right corner. It does not illustrate the sport very well. Up close this image does capture the hustle and bustle of the inner ring. with scoreboards and stalls and team tents along the right side with blurred figures jostling and going about their duties. On the right edge of the ring, you can make out blurred figures of which could be cyclists ready to mount their bikes.

Taking a look at another image (Shorpy.com) we can see some technology we all take for granted today in modern cycling. In this image of Fred J. Scherer and Walter Wiley at the start of the New York to San Francisco bicycle race. We can see some familiar technology. Flat stiff, streamlined shoes, toe clips on the pedals, even a milometer to show how far they have gone, attached to the front fork by the axle. Not a huge amount has changed, some minor tweaks to geometry and materials, drop handlebars and low resistance rolling tyres are all here. Of course, we use battery lights and not acetylene fueled lights! 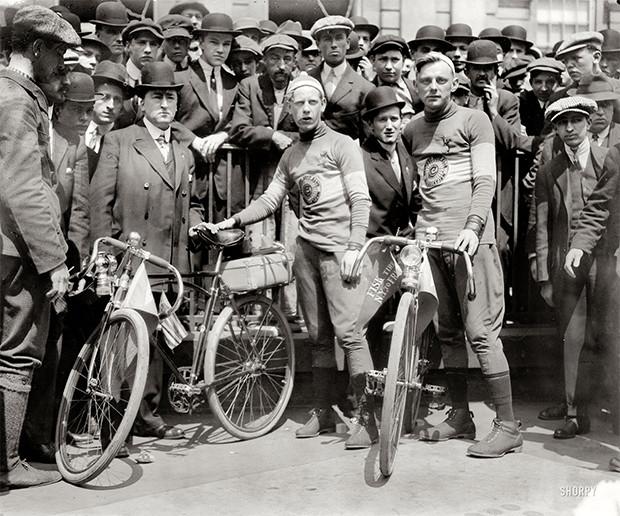 May 3, 1913. “Fred J. Scherer and Walter Wiley at the start of New York to San Francisco bicycle race.”

Both men are wearing some sort of leather wrist cuff wrapped the same way on the same arm, possibly on both arms. Are these to give strength to the wrists that would receive a pummeling over the miles of rough roads? Any information on this please let me know.

What we don’t see today is saddle hammocks. It is what it says! A saddle made in the style of a hammock. Not only does this save masses of weight but I imagine it was fairly comfortable and soaked up the bumps! These were found on the Dursley Pedersen Cantilever “Gents” bike. A folding bike for military purposes that only weighed in at 22 lbs. It was designed to be carried on the back and was made from thin tubing and simply folded in half. The unique feature for me is the “hammock” saddle. Made from silk cord and woven like a hammock tensioned between the two ends of the bike, what a great idea!

Unicycles were another form of cycling and back 1909 there was another race of a different kind, against the clock! Check out the Unicycle record attempt 1909 by Joseph Henry Herbert 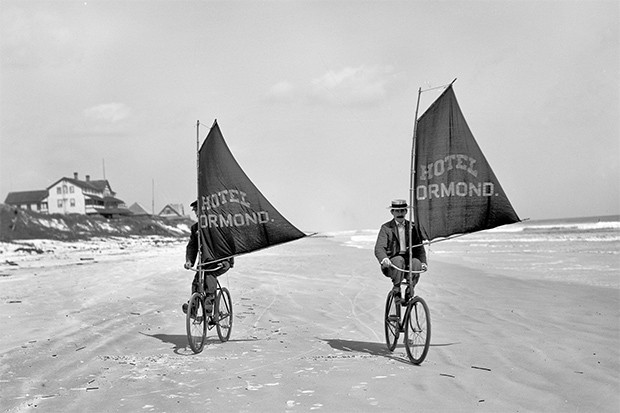