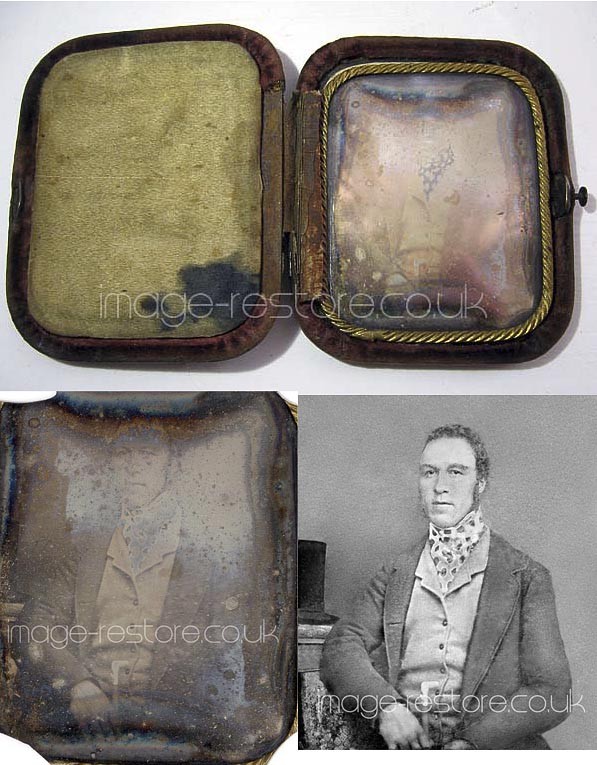 In order to make a daguerreotype, iodine fumes are used to react with a silver-coated copper plate to form light-sensitive silver iodide. The plate is then exposed to light using a box and lens or camera and the image developed using mercury fumes, before being fixed in a warm solution of common salt. This was quite a lengthy process and the exposures were very slow, as the plate was not that sensitive to light as we know photography today. The daguerreotype process was very popular during the first half of the 19th century, it was soon after replaced with faster and less complicated but safer techniques.

Old Daguerreotypes had to be protected by a glass font and sealed to prevent the image getting damaged, The image itself is a thin coating of deposits on the copper plate and can easily be ruined with a simple finger touch. Think of the image rather like candle soot on a glass tile, a very fine powder that can be smudged with the lightest of touches.

I recently restored a Daguerreotype for a customer of mine.

Several scans of this beautiful little old Daguerreotype were needed. It measured around 5 centimetres tall and was encased in a red velvet and brass case, with a glass sealed glass panel protecting the image. The scans were combined to give the best image to start the restoration process.

Each scan contained highlight, mid-tone and shadow information. The reflective surfaces made it very hard to obtain all the detail in one scan. Once combined they were masked out and the areas that contained the most detail were painted back in. When there was a complete image the damage could be restored.

Not an easy restore as you can see but with the usual skill, “patience” the image was restored and completed, eventually!