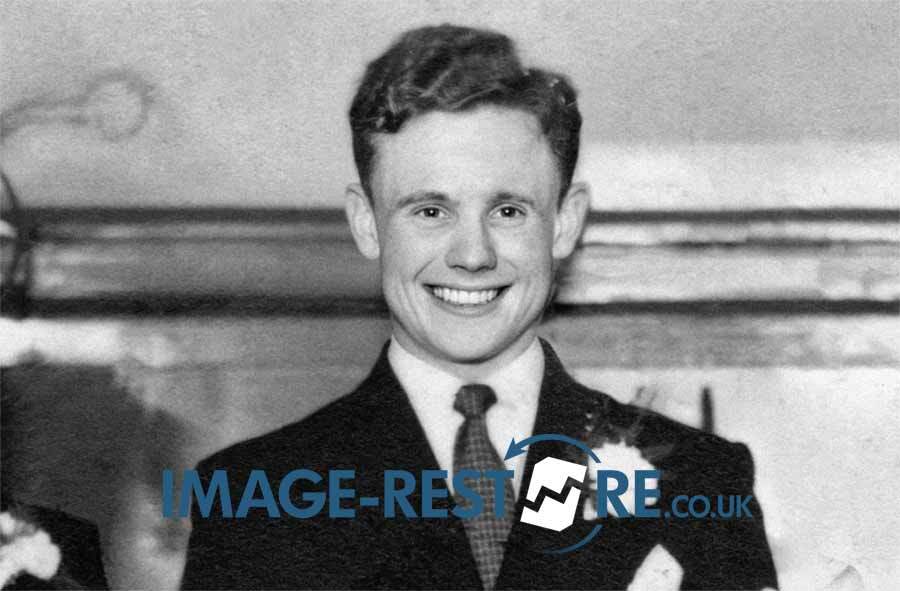 Harry Haddock was a professional footballer in the 1950’s for Clyde Football Club. He married in Helen in 1952, below is a photo from that event!

The photo restoration was straightforward enough with facial reconstruction and some brightening up.  More interesting though, is the man second from the left…

Harry Haddock played 13 times for Scotland, and he won two Scottish Cup Medals when he played with Clyde FC. He played in the Clyde team who beat Celtic in the 1955 Cup Final and then he captained the team in 1958 when they beat Hibernian! You could say that his wife Helen was one of the original ‘WAGS’

“In 1949 Harry was spotted playing in a Charity match and invited to join Renfrew Juniors. He only stayed at Western Park a few months before, on the 1st of September 1949, he signed for Clyde. Interestingly, Clyde had signed him on word-of-mouth – without anyone from the club having seen him play.

His debut came in a friendly against Portsmouth at Shawfield, and he kept his place to make his competitive debut on the 8th of October 1949, in a league match at Shawfield where Clyde beat St Mirren 2-0. Harry played with Clyde for just over 13 years, making his last appearance in November 1962, and in that time made 531 (competitive) appearances out of a possible 618. Additionally, Harry was ever-present in three of his thirteen seasons; 51-52, 58-59 and 59-60.

Harry’s career total of thirteen Clyde goals, eleven of which came from the spot, equates to an exact average of one per season. His first didn’t arrive until the 21st of January 1956, and came in a 4-1 win over Dundee at Shawfield –this was Harry’s 222nd game! Harry did score two goals from open play for Clyde, easily the best of which came at Rugby Park in October 1957, and was apparently a screamer from 35 yards – in his 312th game!

On a personal level, Harry was the recipient of one of the most prestigious awards available to Scottish footballers in the fifties and sixties – Rex Kingsley’s Footballer of the Year. There were no official awards, but this was generally recognised as the most prestigious and was awarded by Rex Kingsley, a journalist with the Sunday Mail. Famous names such as Gordon Smith and Dave MacKay had won previously, and in 1959 it was Harry Haddock’s turn. The award came right at the end of the best decade to be a Clyde fan and was a fitting tribute to a Clyde legend. Incidentally, the award came with a trophy, and a meal and formal ceremony in St Andrew’s Halls, Charing Cross, Glasgow – Harry’s was on Valentine’s night 1960.”