Military photos of troops or regiments were popular in the World Wars.

In this Military photo restoration Lucknow India 1934, it shows Machine Gun (MG) Troop 10th (P.W.O) Royal Hussars, you can clearly see the water-cooled Vickers machine gun showing it’s a fluted water-cooling tank. A hose would fit on the side and water flowed around cooling the barrel. The photo was taken just two years before the regiment returned to the UK in 1936.

The restoration techniques used here were, recreating limbs from other limbs, filling in jackets and belts and facial reconstructions. Where a person was missing I used artistic license to recreate the missing figure. ( For an instructional video using similar techniques, try this post on recreating missing pieces ) Cutting sections from one area, like a jacket, distorting it and setting the mode to “darken” was frequently used. Each time blending with patch and clone and dodging and burning was used to ensure all the tones were correct. 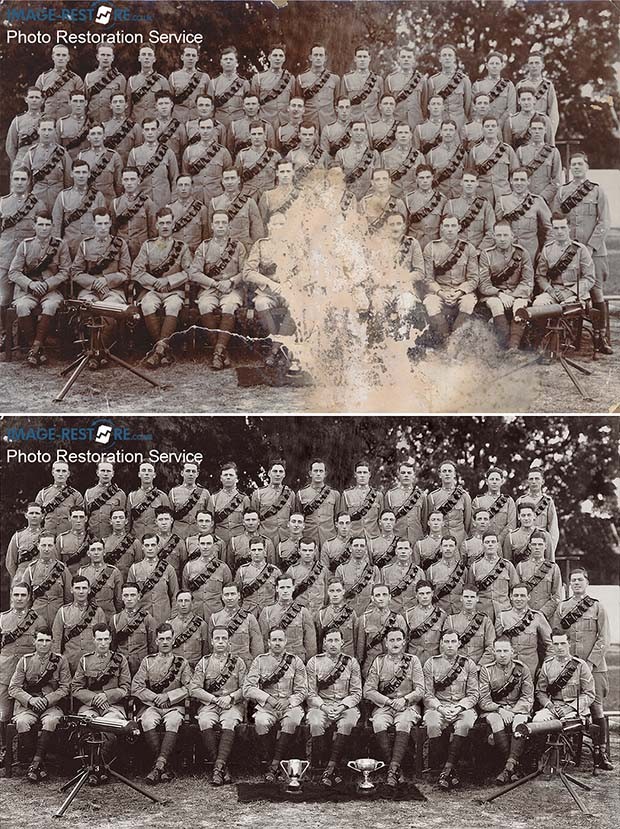 Lucknow India 1934 Royal Hussars restored before and after

The military photo restoration was produced in line with the request from the customer to “fill it all in”. There was no choice but to create one face from features from others. This way there were no repeat faces. The trophy at the bottom of the image had all but gone. The left trophy was recreated with a “flip” and the right was a trophy borrowed from another photo in the same year. 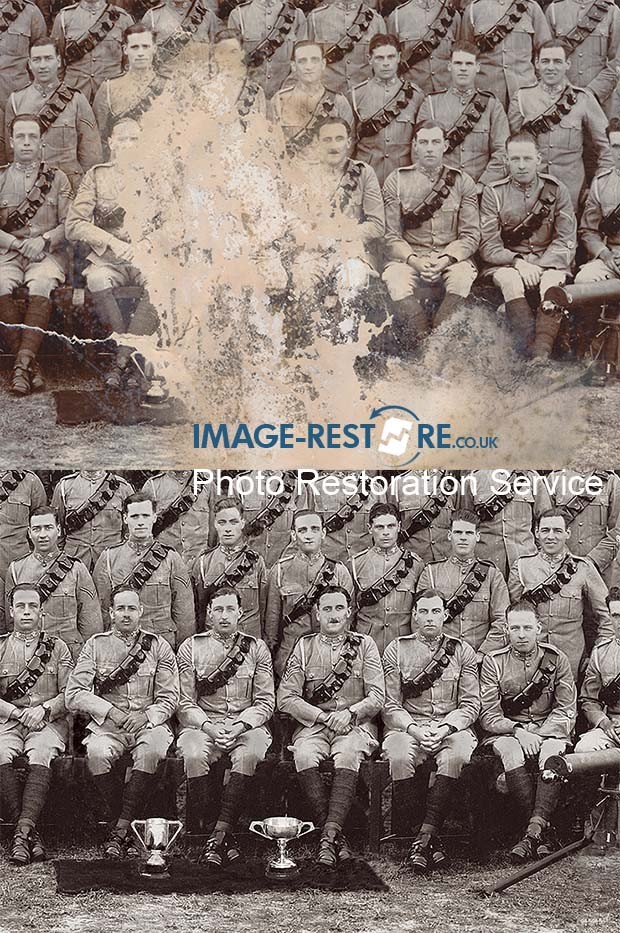 Lucknow India 1934 Royal Hussars, close up detail of the restoration

Initially, it looks like it is possible to cut and paste from one area to the next. This does not work as everyone is out of alignment and bodies of different shapes and sizes do not match. A lot of work went into this restoration.

One question that may come to mind is the ethics of restoration Vs recreation. Whether to make something up for the sake of a complete photo or to restore what is there and leave the missing person alone. For a historic restoration, it should only be restored where details can be seen to be there. For producing work that is in agreement with the client’s wishes, a full restore was needed.

If you own a military photo like this and need your photo restoring, take a look at my photo restoration page to see how I could help.