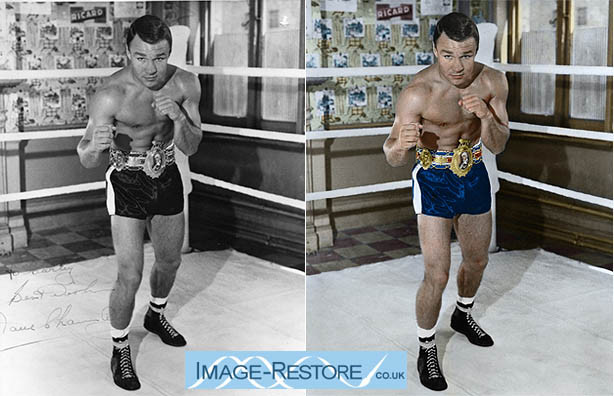 Skin recolouring is not always easy. There are many subtle tones in human skin.

There no Wikis for Old boxing photo recoloured but there is a Wiki description of Dave and his fighting style. “Charnley had a powerful build and large forearms and was often compared to the “Toy Bulldog” Mickey Walker. He also had good tools. He had double and triple hooks and was a true scrapper with plenty of bottle.

His trademark was an aggressive attacking style. Quiet-spoken and an introvert outside the ropes, his self-effacing modesty was no public relations gimmick. Charnley was merciless once ring battle commenced. Inside the ring, he was a furious brawler who gave and took brutal punishment.

Only Joe Brown stopped him on cuts and until his last fight, only welterweight great Emile Griffiths stopped him from going the distance. Charnley ended his career fighting welterweights and was a really tough opponent for anyone.” 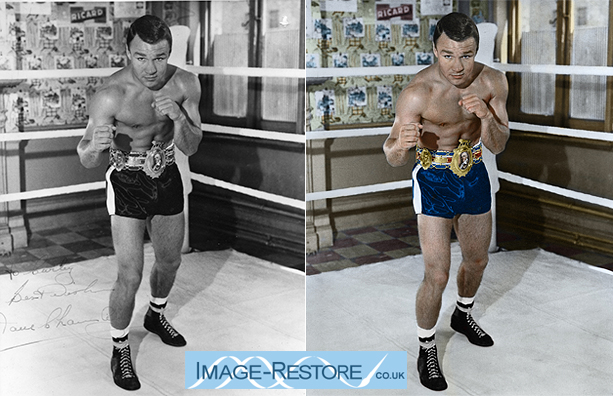 Skin recolouring is either done well or looks garish and unnatural or flat. Boxer Dave Charnley the Dartford Destroyer

If you want to practice colouring skin you will find plenty in the sport of boxing. This is an image of Dave Charnley the Dartford Destroyer. Here I have used the method my regular readers will know about by now. Five layers using five colours. Each revealed by painting on masks to concentrate on the tones of grey within the black and white image. Redder tones on the darker areas and going down through the colours towards the lighter shades towards a yellowy base tone.

This is Just a quick show and tell. I see too many coloured images with skin with just one colour. Hopefully, you will see this and it will inspire you to try with more colours. Even blue for veins where they stand out and magenta to tone down the reds. You can always add a blue or coloured wash to bias the overall skin tone to a particular lighting condition. Practice your colouring with our skin colouring tutorial

More on Dave Charnley from Wiki below.

Charnley made two unsuccessful world title challenges against his arch-rival Joe ‘Old Bones’ Brown. He was stopped by Brown on a cut eye in Houston, Texas, in 1959 and was narrowly out-pointed in a controversial 15 round bout in London on 18 April 1961. Ring Magazine called this second bout “Fight of the Year.” Many say Charnley should have won. [1] The decision is still contested by Charnley and most British writers.
He eventually defeated Brown in six rounds in a non-title fight in Manchester on 25 February 1963.

Dave was born in Dartford, Kent in 1935 to Scottish parents from Craigneuk, Lanarkshire. Before he became a boxer, Charnley worked at Vickers Engineering Crayford as a boilermaker. He began pro-boxing on 19 October 1954 and his strong punching won him the 1954 A.B.A. Featherweight championship. He turned professional the same year.

He became British Lightweight Champion at 21 by out pointing Joe Lucy, another south paw, on 9 April 1957, but in his first attempt later that year to win the Empire title on 9 July he was beaten on points by the brilliant South African, Willie Toweel. In 1958 he met future world champion, Puerto Rican Carlos Ortiz at Harringay Arena where he lost on a 10 round decision.

In a return match against Willie Toweel on 12 May 1959, Dave Charnley punched with such authority that the championship changed hands in the 10th round when Dave won by a knockout.

Dave challenged for the World Title at Houston, Texas on 2 December 1959, against Joe Brown but was forced to retire in the fifth round with a badly damaged eye. He fought Brown again, this time in London on 18 April 1961, and lost a bitterly contested duel that many fans thought he had won. By way of consolation Dave knocked out Brown in six rounds in a third meeting, but only after the American had lost his World title.

Before his second bout with Brown, Dave added the European Lightweight Title to his British and Empire Titles, when he met Mario Vecchiatto of Italy on 29 March 1960. He forced Vecchiatto to retire in the 10th round.

On 20 November 1961 Dave Charnley met challenger David “Darkie” Hughes of Wales for his third title and stopped the Welshman in 40 seconds, including the count, a record win in the British Lightweight class.

In 1962 Dave went to Jamaica, losing his Empire title on a close point verdict to Bunny Grant, but he won his Lonsdale Belt outright by defeating Maurice Cullen in Manchester on 20 May 1963. That year he also forfeited his European title.

As there were no worthy challengers in the Lightweight division, to continue boxing, it was necessary for Dave to move up to the Welterweight division. He was then game enough to challenge the World Champion, Emile Griffith, but took a bad beating and the fight was stopped in round eight.
Dave retired from the ring in 1964 as unbeaten British Lightweight Champion.

Charnley estimated his ring earnings to have been in excess of £400,000, a considerable sum at the time. When he retired from boxing in 1964 he took a different direction in his life. Dave opened and operated hair salons, which became quite profitable for him.
He later moved into building and property refurbishments buying land and building estates in the Dartford area. He established the offices of his company in Regent Street, where the business expanded through restorations of hotels and other projects. His various business enterprises generated him a lot of money late in his life.

Charnley’s biographer, James Kirkwood, said: “It may be a cliché, but it really was true of Dave that you never heard anybody say a bad word about him.”
He died of lung cancer on 3 March 2012, at the age of 76.

If you have a photo with a lot of skin, perhaps a beach photo? that requires colouring, check out my main colourizing a black and white photo, page.