So old and damaged I nearly turned the job down. In fact, other companies had done so! Sometimes I take a look at a photo my initial thoughts are, “no way I am not fixing that”.  This was one of those images.

It had been with the client some time and was in desperate need of repair. They required it fixed but without an airbrushing or background replacements, as near to the original as possible. The only caveat was the lack of detail in the foreground. 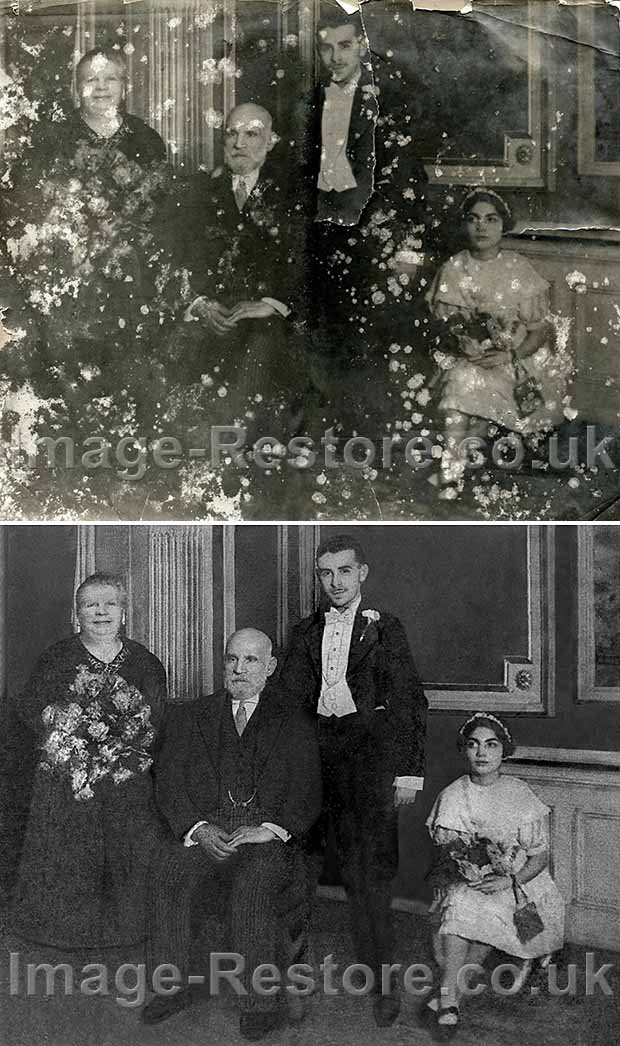 Photos this old and size (around 16 inches) are often on board, almost like a fiberboard and suck up water like a sponge. Once this happens the board swells and softens and is prone to bending and cracking and flaking. All of which had already happened. Photographers were aware that images did not always turn out as they intended and had their own toolbox of fixes waiting in the wings. Just like today, they would have their equivalent of Photoshop on standby. Inks and pencils and dyes were used to outline areas that did not turn out so well, to give depth to a photo. Knowing this I used similar styles to enhance the foreground details so they did not look out of place.

The initial restoration had the seated man in a rocking chair but as the restoration went on I realized it was not the case.

As the restoration went on the feet had to be drawn in and the flooring shaded in such a way it did not look airbrushed. The restoration took far longer than I had hoped but the end result pleased both the client and me. When we are both happy, I am happy! To see what other damage can happen to board based photos see this post on restoring an old photo with flake emulsion.

This year has been one of the longest and toughest yet, thank you all for stopping by the site.