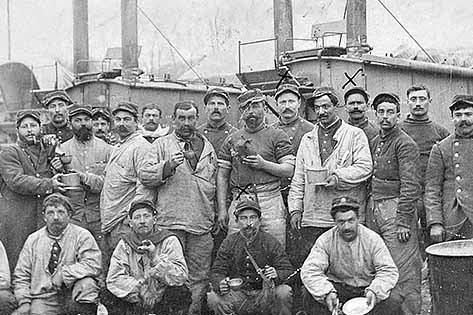 WW1 had umpteen stories to be told about individuals who fought and contributed to the war, this is one story of Pierre Rivet, WW1 letter dated April 4th 1915 Verdun, France. It was translated from a French letter and photo from europeana.eu I want to highlight that the site has many images and stories that depict life during the war and is an amazing resource of information.

This post is about what that resource can bring up and how it can be shared and appreciated. Not about photo restoration in the literal sense of the word but about restoring the memories behind the photos and the gaps they can fill in history.

Letter from Pierre Rivet to Marie Rivet, with his comrade bakers, Verdun, 4 April 1915 | Rivet and Pierre 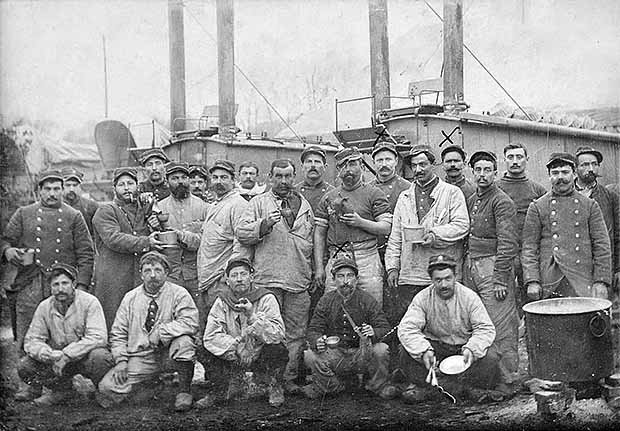 From the following letter, it is unclear as to which person in the photo is Pierre.

René Salleyrette tells the story of his maternal grandfather, Pierre Rivet. Pierre a native of Landos in the Haute-Loire, who had gone to the front while his youngest son is only 3 years old.
Among the personal papers of Pierre Rivet, preserved and annotated by his grandson René Salleyrette there was a photograph dated 1910. This showed an order of call under the flags, confirming that Pierre Rivet joined a regiment in Clermont-Ferrand before the war.

One letter is dated December 1914, all the others are after 1916. Pierre Rivet only mentions the war in short throughout his correspondence which suggests to his grandson that he avoids the subject because of censorship. René Salleyrette confirms that the topic was also only briefly spoken about within the family.

The recurring themes within the writings of Pierre Rivet relate to the family and his sick boy, to the management of the family bakery, kept by his wife since his departure and to the care given to the family animals. In April 1915, Pierre is assigned to the fixed ovens at Verdun, and prepares bread for the troop. In Peter’s family, it was always thought that if he had not been a war baker, he would have died much sooner.

On July 10, 1916, responding to the last letter he received from his wife Marie, Pierre became a thinker and a poet: “You can believe my dear Marie that they give me more pleasure than military theory. Is the extreme games of life, your letters are the very sweetness that ennobles our life while the rest is carnage and destruction. When will I be rid of this tyranny that tortures us, how many times we repeat it in a day when the painful hours snatch you from this cry of distress … ”

From mid-July 1918 his wife Marie had no news of Peter and the last letter she sent him on August 5 was “Return to the sender”. Her fears were confirmed when she received a letter from Chaplain Joseph Bossart, dated August 10, 1918, in which he told her the terrible news. Her husband died on 18 July 1918 near Cormoillieux between Reims and Epernay. The chaplain-bearer weighs his words, he sympathizes with and shares the pain of the soldier’s wife as a good Christian. “I understand how painful this cross has been sent to you by God.”

In a letter on August 21, Joseph Bossart explains to Marie the chronology of the last moments of Pierre Rivet, “[…] men came out of the trench at 9:05, so it could be 9:15 when it was his life was taken. Everything suggests that he was killed on the spot, but I can not give you certainty. His death caused by French artillery fire.

In December 1918, Marie sought to find her husband’s body, she went to the battlefield and had several bodies unearthed, it was never the right one. With each exhumation, came great emotional cost and disappointment to everyone. Later, it was his grandson who went to the military cemetery of Chatillon-sur-Marne, more precisely to the priory of

Later, it was his grandson who went to the military cemetery of Chatillon-sur-Marne, more precisely to the priory of Binson, in the wood of Courton, west of Epernay. He found the cross of his grandfather! Unfortunately, his body had been moved several times and buried in a common grave in a cemetery.

This story of a baker during the war echoed deeply with me as my Grandmother helped deliver bread during the war, you can read about her adventures here.  The life and times of Elsie Johnson

Article Name
One man's story - WW1 letter dated April 4th 1915 Verdun, France
Description
WW1 had umpteen stories to be told about individuals who fought and contributed to the war, this is one story of Pierre Rivet, WW1 letter dated April 4th 1915 Verdun, France. It was translated from a French letter and photo from europeana.eu I want to highlight that the site has many images and stories that depict life during the war and is an amazing resource of information.
Neil Rhodes
Neil Rhodes
Image-restore.co.uk
Image-Restore.co.uk
https://www.image-restore.co.uk/new/wp-content/uploads/image-restore_logo_notagline.png