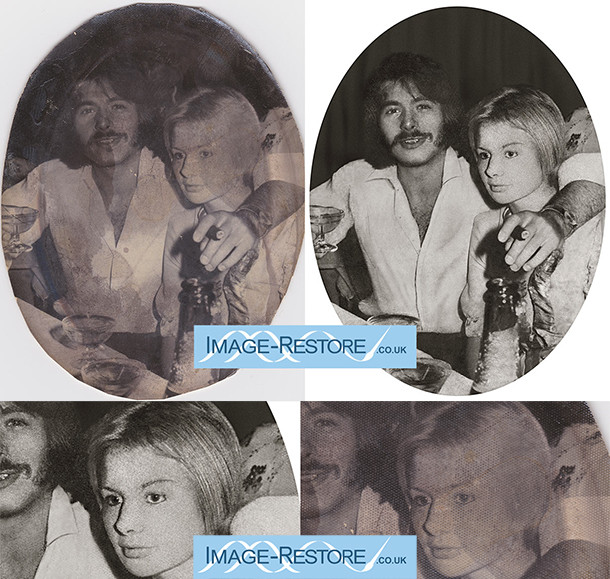 Water stains on a photo can be restored but some are far more tricky than others.

I was recently contacted by Robert who had an old photo mounted on card. A long time ago it had received some water damage which had since gathered dirt. To compound the problem the surface of the photograph was textured with those horrendous “stipple bumps”. Up close it looks like someone has covered the photo with bubble wrap. This was a surface treatment originally designed to toughen the image for wear and tear. It did not appear to be affected by thumbprints so seemed the ideal Matt paper. Unfortunately, it left a myriad of minute channels and troughs for dust and dirt to gather in over the years. 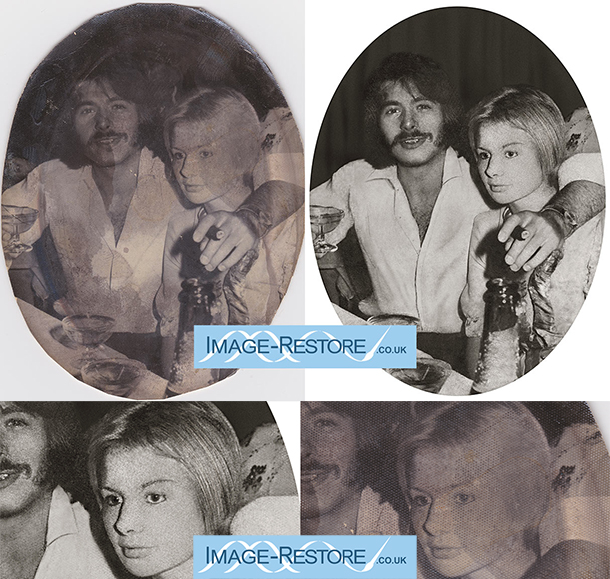 Tackling this image required the use of a variety of techniques from the restoration toolbox.

Firstly the image was treated with an FFT filter to remove the texture. (Fast Fourier Transform). “Fourier” is the surname of the person who invented the technique. He came up with a way of deconstructing an image mathematically and with his calculations was able to detect and then remove regular patterns or textures. If you own a digital image editing program you may find a plugin or process that uses this to remove textures.

The image was then converted to a black and white. The uneven contrast was tackled next. Sections of the image were masked out and brightened and treated for tone and contrast to attempting to get a more evenly lit image. Ultimately the problematic sections were lightened or darkened with a soft brush, dodging or burning where needed.

The man’s shirt was almost completely remade due to texture loss when brightening. I painted in base white, added noise or grain to it and matched this to the underlying texture of the image with a little blur. The collar and folds on the shirt were shaded in with a soft brush. A similar process was used to recreate the curtain backdrop.

Skin textures are always the hardest to get right. On the right-hand side, the girl’s skin and hair took the most time. Robert knew how he wanted the hair to look so we worked through a few edits to get this right, trying shiny hair and partings in various places. The skin also took some time to keep it even without losing too much facial form. Robert had paid a premium price to get the result you see and his girlfriend on Valentine’s day was over the moon!

If you want a photo restoration and don’t know where to start, check out my main photo repair page for more details on how I can help you and how you can hire me.