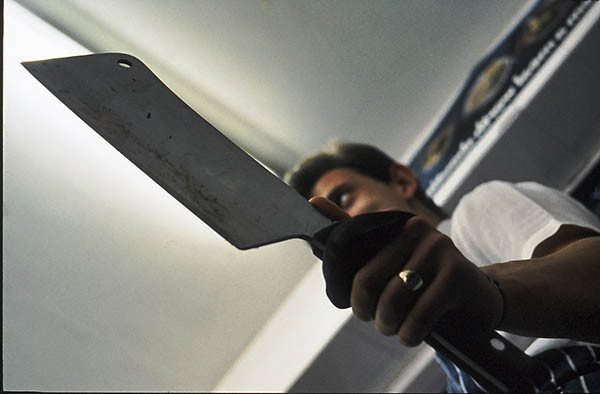 Sometimes things turn up when you least expect them such as these slides from 1990 I found in my collection. Retro colour slide film. Some gritty images in a low-income area shot in a butchers shop.

I think we were all a student once and these were shot as part of a student project. I remember the butcher asking me to hurry and take the shot with the clever. “It’s heavy,” he said. I bet it was too it looks like a monster chopper. My personal favourite of the three is the shot of his legs. You don’t normally look on the floor of your local butchers and this was not unexpected. Sawdust and cleaning agents!

Slide film is such a wonderful medium, rich colours and dense blacks and reproduces great in a scanner. The retro look of these comes from the fact that they are in deed retro.  I seem to remember the camera was Fuji X300 manual focus camera with a zoom lens and built-in light meter. Not an expensive model by any means but it did take those lovely old 35mm film cartridges, remember those? Pull the film across to the sprockets and close the back and wind on to the first frame. It just doesn’t feel the same with digital, does it?

In this case, no photo restoration was needed. Just a quick scan for some gritty, charcoal blacks and that slide film character. Just thought id share them, I found them spooky, what do you think?