Home » Blog » Genealogy » The Life and Times of Elsie Johnson

The Life and Times of Elsie Johnson 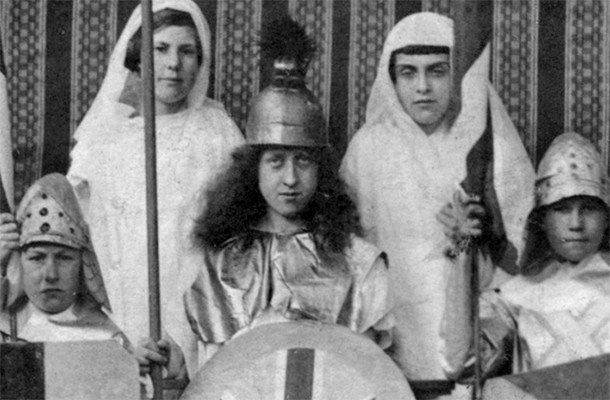 A celebration of the life of a truly remarkable woman Elsie Johnson, my Grandmother, she brought joy to all and gave so much to her local community. She will be remembered always. 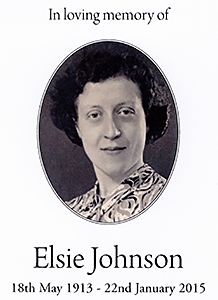 Elsie was born in Hollingbourne Near Maidstone.

The house was located near the Fullers Vale pond, Headley, Surrey. The pond lies at the top end of Fuller’s Vale (B3002), near the junction of Beech Hill, Pond Road and Gentles Lane.

*”I think one of my first memories of the pond was the use made of it by the ducks owned by Mr Hall, our nearest neighbour. Each morning they would waddle in view of our kitchen window to the pond where they spent the day. No assistance was needed to help them cross the road, for motor traffic hardly existed then.

Later I have happy memories of paddling on hot summer days in the cool, constantly running water.
A huge beech tree grew at the far end, on the edge of a field. From the bank below it a spring flowed continuously, keeping the water sparklingly clear. The tree had low, spreading branches on which, as children, we could sit dabbling our feet in the water, while watching the numerous beautiful dragonflies, and occasionally a kingfisher.

Tiny fish also were a joy to watch, and tadpoles to catch in their season!
Rushes grew abundantly around the pond’s edges, which we made a hobby of platting and making into mats and tiny baskets.
In winter, when frozen, it became a great attraction to numerous children from near and far who would slide on it, and several young people from the larger houses came to skate and even ski from Mr Phillips’ woods adjoining Hurland Lane, finishing their run on the frozen pond.”

Growing up Elsie attended the Village school, Headley School, with her brothers, Fred and Eric and her sister Mabel.

We can only guess from these pictures that she liked to be the center of attention, as a child or she was genuinely liked by everyone, which I think was more likely. She can be seen here in several school photos. 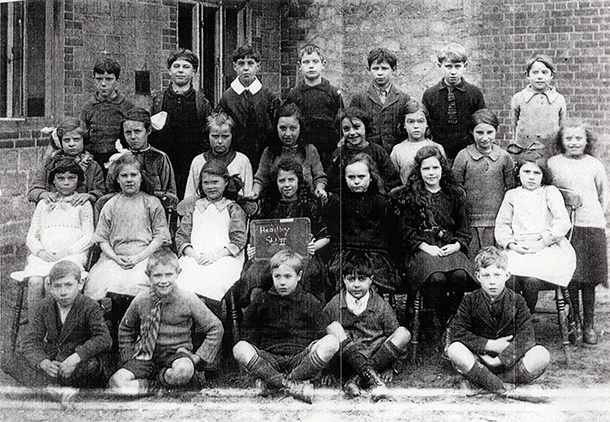 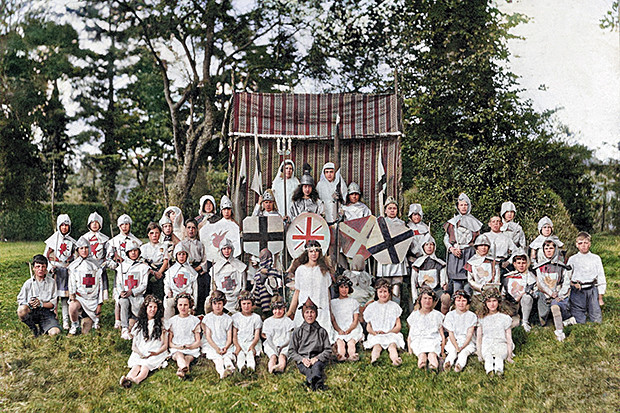 wikipedia – “The Pageant of Empire was a set of historical pageants, directed by pageant master Frank Lascelles on behalf of the British government, for the huge British Empire Exhibition held at the Empire Stadium (later Wembley Stadium) in 1924. The Exhibition was opened on 23 April, and the Pageant was performed between 21 July and 30 August. Its full title was The Pageant of Empire: An Historical Epic.John Owen Smith – Headley Historian” 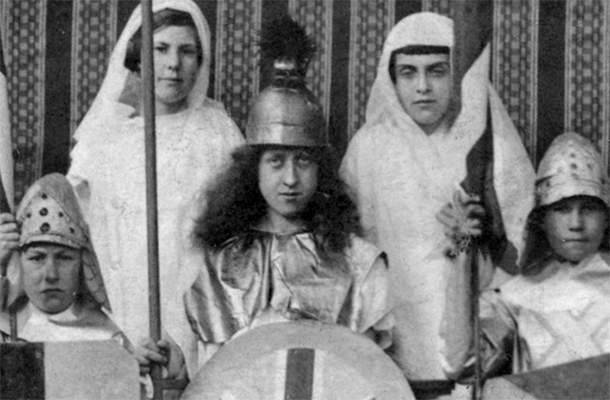 Her grandmother remained in Maidstone and it was the custom for her father and elder brother to visit her on August Bank holiday and the year Elsie left school at the age of 14, she was allowed to go too. They cycled the 76 miles but she recalls there was less traffic in 1928!

Elsie’s first job was in service in London as a Parlourmaid. She then went on to become a cook and chauffeur for a family in Grayshott. During the war years, she was a van driver for the local firm Buck’s the Bakers delivering bread all around the district and being rationed to 6 gallons of petrol a week. She would frequently have to dodge the many military vehicles that were present due to the many Canadian troops that were stationed nearby.

She recalled more on the Fullers Vale pond

* “Accidents happened on the sharp corner of the road near the pond. I well remember my father being called upon to help rescue passengers from cars, trapped in the water. In 1935, for example, we heard, “The Rector’s car is in the pond!” Great excitement. Actually, it was Alec Alexander, the curate. His fiancée lived at Merrow, a long way to cycle, and he had just bought a car and was an inexperienced driver.
In those days, a stream always ran from the pond along the left-hand side of the road towards Headley but entered a culvert under the road before the hill, where it continued down the valley to Arford.

Towards the end of the War, when Ludshott Common had been stripped of all vegetation by the tanks training there, Pond Road became the catchment area for water draining off the common land, and that caused the pond to overflow and flood really seriously, becoming a positive river flowing rapidly through to Arford. My parents’ shop suffered badly from the flood water, and I almost needed a boat to go to All Saints’ for my wedding in October 1942-the ‘river’ had been running for 3 days! This happened repeatedly thereafter and explains why the pond was eventually drained but it completely changed what was once a delightful scenic corner of Headley.” 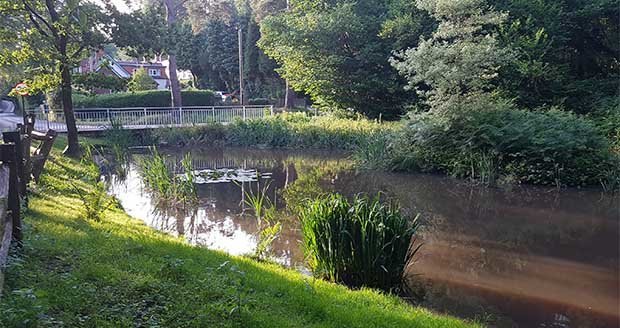 Fullers Vale Pond (Summer 2017) Restored to its former glory, Elsie would have loved to see this! The road can be seen showing the 90-degree bend at the bottom of the hill (hidden from view but to the right)

In 1942 she married Sydney William  Johnson on the 28th October 1942 and wasn’t long after before they moved into a large bungalow on Headley Down, Surrey called “Good Luck”. 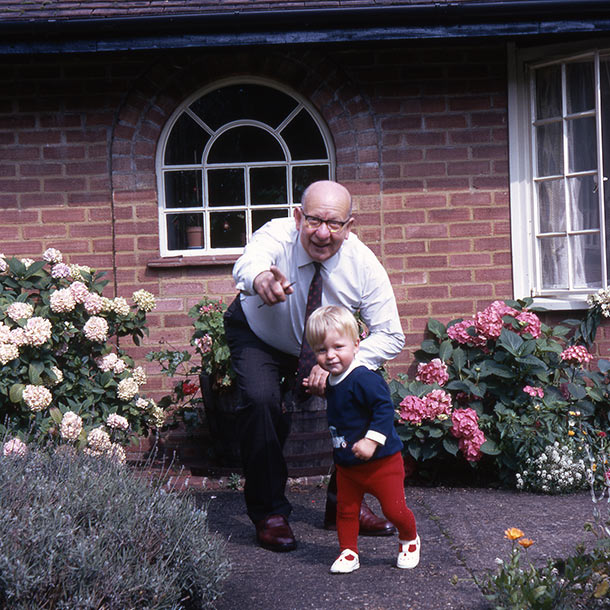 Sydney William Johnson 1971 with his Grandson, Simon Rhodes in the back garden at “Good Luck”

That Christmas she recalled,

*“I can remember one incident on a Saturday night. Mabel and I had come home from work – we often didn’t get back till nine – and mum and dad were scrubbing out the shop. We had a plain white wooden floor and stairs, and every Saturday night without fail they were scrubbed. Newspapers were put down, and the lights were on downstairs, though you couldn’t see much of them through the shutters, and some Canadians walking back down to the village tried to get in. They thought it was a pub.

Father shouted to them that we were shut and we didn’t sell liquor, but they climbed the bank on the left-hand side and walked in through the kitchen door. I can see dad now, coming up the stairs with a scrubbing brush in his hand – and with brute force, we all pushed these lads out. We didn’t know any of them, but they were determined it was a pub and that they were coming in for a drink.”

Elsie kept herself busy with the Young Wives group whilst “John” (her name for her husband) worked the days in his Hairdressing shop in Grayshott. I may be wrong but there was a Johnson who previously had a Hairdressing business there, William Henry Johnson so could mean that “John” was carrying on the family business. Elsie’s children Celia and Richard were born a few years later but it did not stop her taking an active role in the Mothers Union where she represented the Hampshire District at annual conferences.

The Church was very much part of Elsie’s life with St Francis the “little church” at Headley Down and the Parish church at Headley. Teaching Sunday school each week, doing the Church flowers and constantly in the thick of Parish life. She was well known for her never-ending energy and enthusiasm.

Her garden was another joy. The large back garden was mainly put down for vegetables, a constant source of provisions for the kitchen. Brightly coloured flowers grew just about everywhere they wanted to. Elsie’s ability to just stick the broken bits of plants in the flower bed and make them grow was one of her magical abilities.

Elsie love of her family showed at gatherings held in her beautiful garden, her legendary cakes, meals and Johns jokes assured it to be a great day. She was thrilled to bits when 4 grandchildren were born and so enjoyed having them to stay for the night.

When John eventually retired they decided to downsize to Headley where a new part of their life began. Elsie would take on new roles in the village and even took part in a sponsored cycle ride in aid of the village centre, She was only in her mid-seventies after all! 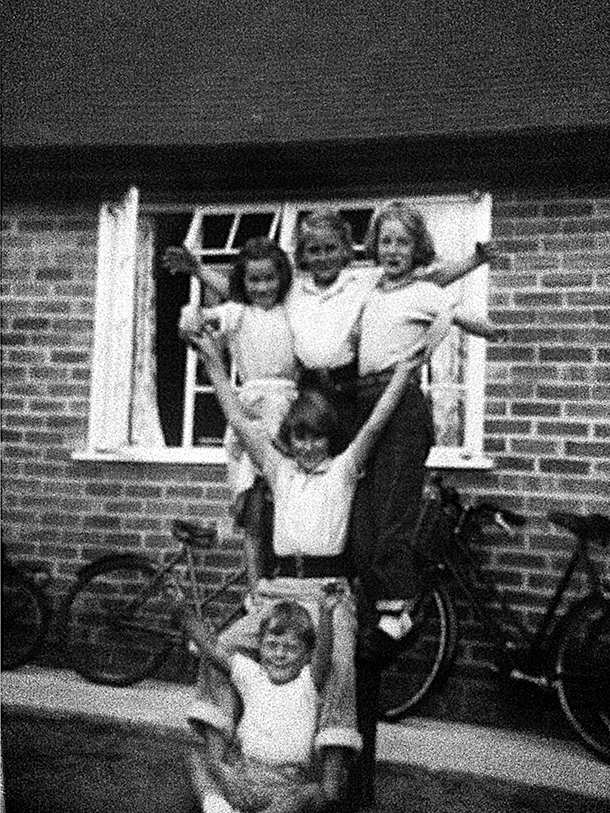 Elsie’s bike, seen here on the right-hand side, parked at the back of “Good Luck”, Stonehill Road, Headley, Hampshire

Sadly John passed away and she was persuaded to move to Southwick to be closer to Richard her son, so he could keep an eye on her. With her amazing ability to make new friends she soon became settled and involved yet again with local Church and various organizations such as The Town Women’s Guild, WI, The Horticultural Society and helping with the lunches at The Little Angles Toddlers Group. Another change to make her legendary cakes!

After Grandchildren came Great grandchildren and she was blessed with four boys and two girls. She had many nephews and nieces and she was also a great Aunt and known as “Aunty Elsie” to many more. She loves to live by the sea and more than once went in for a dip! as well as going to the local swimming pool. The much smaller garden soon took on the famous “Elsie look”. Her newly extended family made her very welcome and she joined in the fun of Christmas gatherings, scoring a memorable bull’s eye in a darts match with her very first dart!

Her 101 wonderful years will be remembered for her smiling face, generosity and ability to never complain.

Elsie Johnson was loved by all who were privileged to meet and know her. 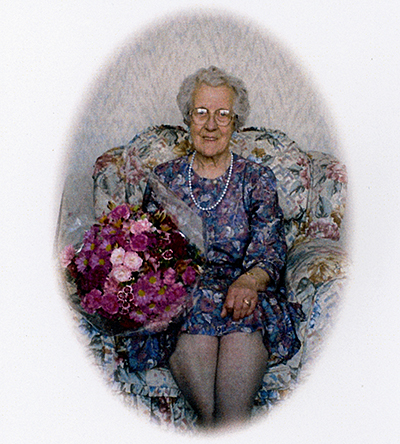 In loving memory of my Grandmother Elsie Johnson

With thanks to Richard Johnson for the main body text, giving me the inspiration to write this post, with excerpts from John Owen Smith – Headley Historian.

EDIT – Elsie’s Ashes have now been laid to rest with her Beloved “John” in the Headley Church Graveyard along with her parents. 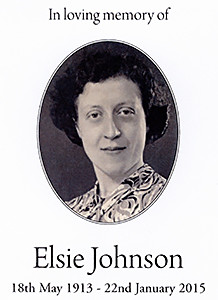