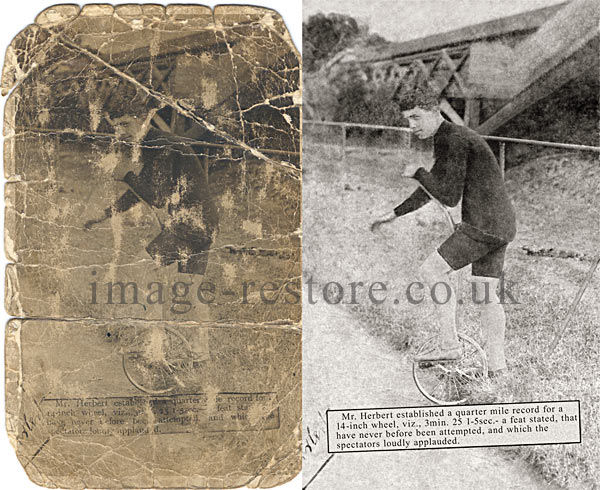 I wanted to share this fabulous photo with you all. A customer of mine sent it to me to be restored and what a fascinating restoration project, not much is known other than his record attempt was to ultimately end in tragedy! 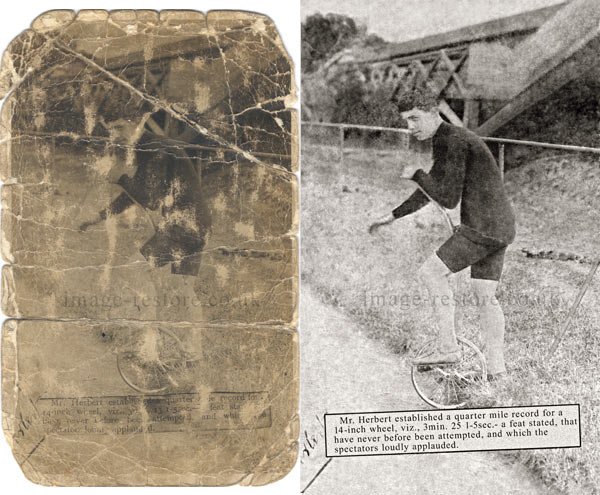 The caption in the photo reads

“Mr. Herbert established a quarter mile record for a
14-inch wheel, viz., 3min. 25 1-5sec.- a feat stated, that
have never before been attempted, and which the
spectators loudly applauded”

Any cycling buffs would be interested in this as it’s a very early example of a unicycle. What’s curious about is that it has a very small wheel and not at all like the huge, one wheeled descendants of the Penny Farthing. It looks rather like someone took the huge wheel out and left the small stabiliser wheel at the back and added some pedals. The tyre is still solid rubber and it looks like to me the seat is on a small bracket sticking out from the curved central pillar or just a leather strap around his bottom.

The information I have is that Joseph Henry Herbert was born in Islington, London in 1894 and died in Nottingham 1924.  The story goes that he was kicked by a horse in the chest, and while in the hospital he was put him in a steam tent to help him recover from pneumonia but alas he died. He was married to Violet and he left 7 children all under 12 years old.

A very sad tale indeed and if anyone reading this happened to know anything about this please contact me. This memory of him can now live in on in his restored picture.

If you want a photo restoration and don’t know where to start, check out my main photo repair page for more details on how I can help you and how you can hire me.