Waziristan and the march to Razmak in old photos 1936 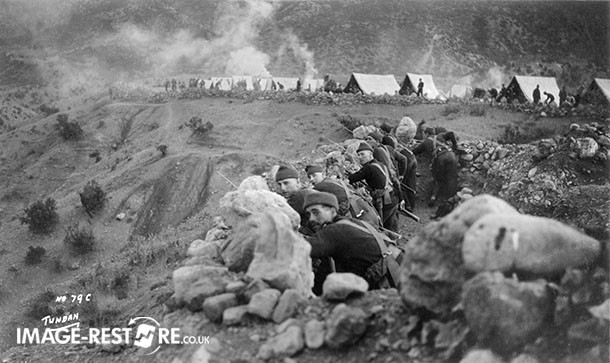 The Waziristan campaign 1936–1939 comprised a number of operations conducted in Waziristan by British and Indian forces. This was against the fiercely independent tribesmen that inhabited this region. These operations were conducted in 1936–1939, when operations were undertaken against followers of the Pashtun nationalist Mirzali Khan. Also known by the British as the “Faqir of Ipi”, a religious and political agitator who was spreading anti-British sentiment in the region. Undermining the prestige of the Indian government in Waziristan at the time. (Wiki source)

The images show the journey that the 1st Bn The Northamptonshire Regiment (48th Regt of Foot) took through the area, their camp, outposts and transport [thanks to Ben Edwards for the clarification]. There are some images that show other key points in the area. The image may not be in the correct order. They are particularly sharp and some have great detail to investigate. Ladhay camp has a cropped section showing the “screw guns”. 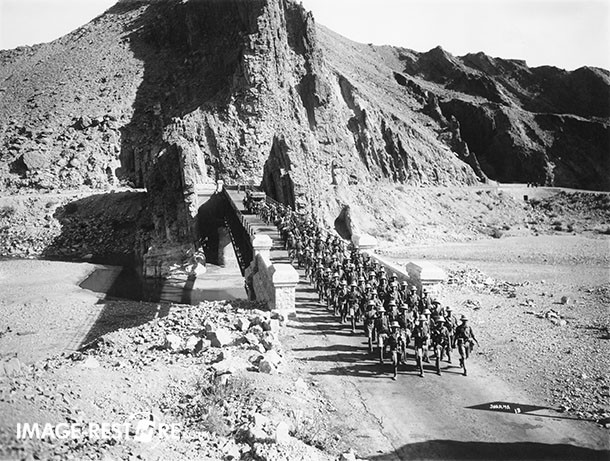 View of the march en route to Razmak taken in 1936. This bridge is located between Bakakhel & Mir Ali on the road connecting Bannu & Miranshah. 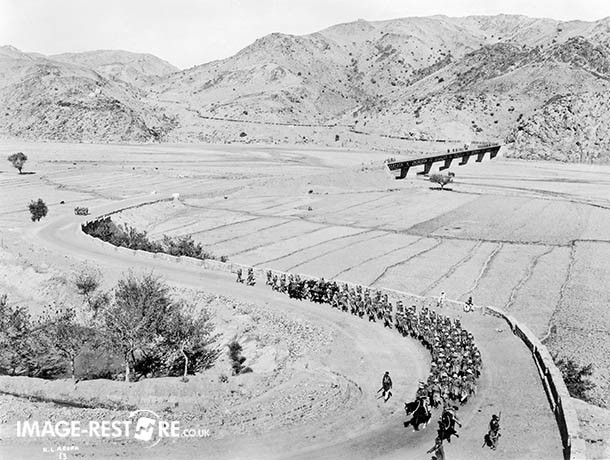 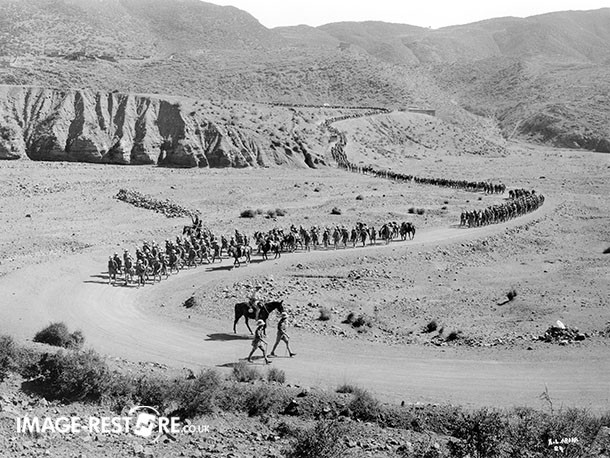 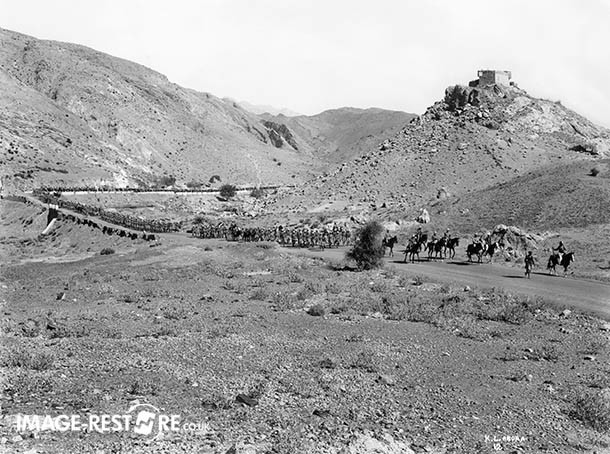 A column of Troops returning From Khaisora Operations To Razmak 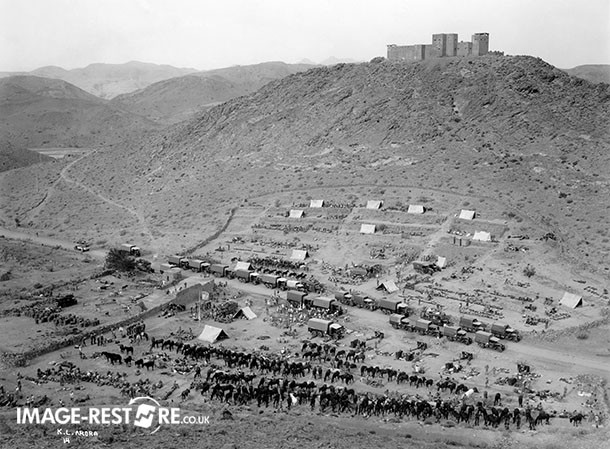 The large guns or field artillery used during the campaign were called “Screw guns”. These were so-called because they could be broken down for transport by donkey through the sometimes difficult terrain. They could then be reassembled by screwing the two halves of the barrel together. 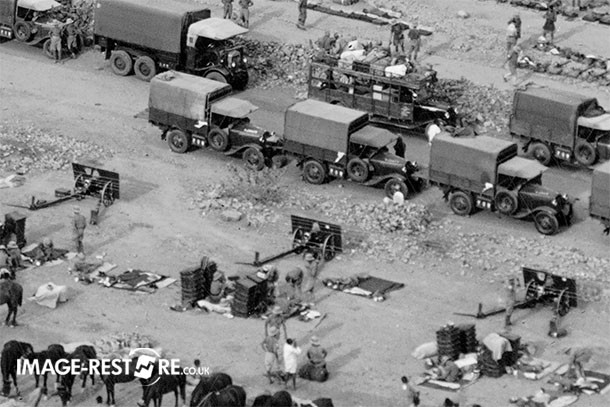 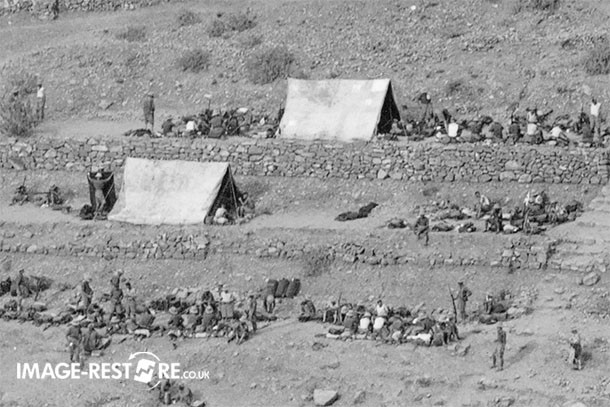 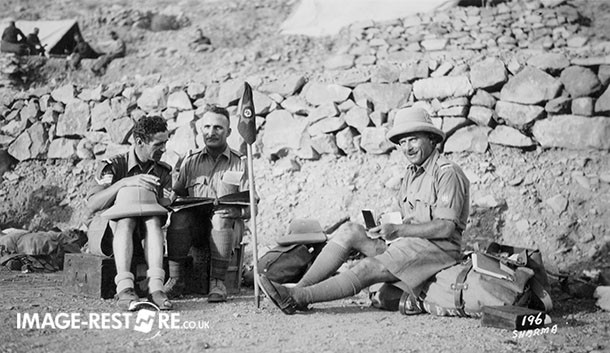 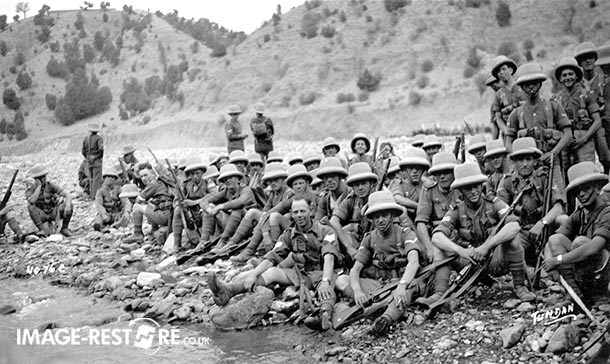 River rest stop on the way to Razmak 1936 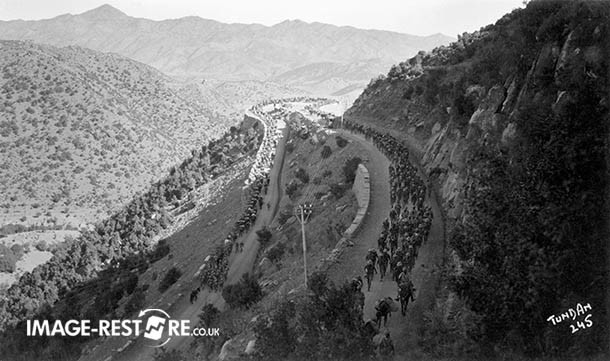 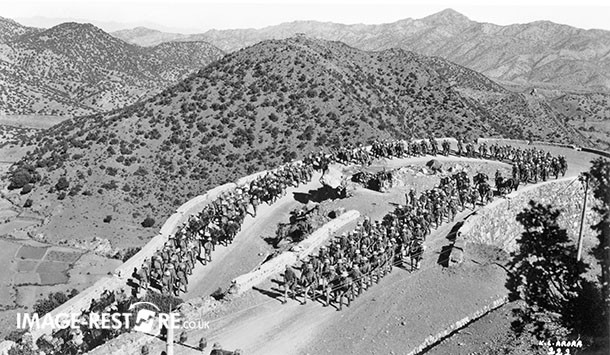 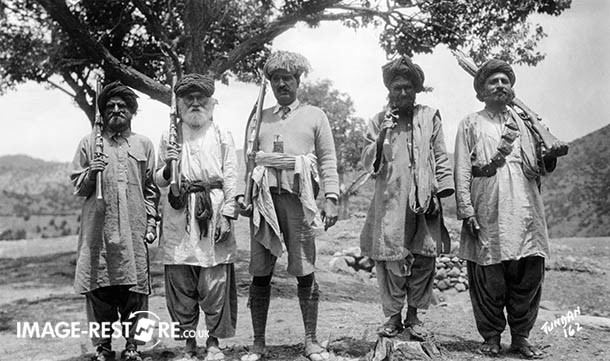 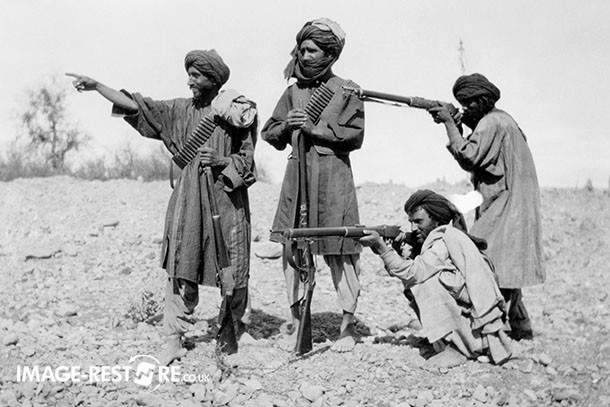 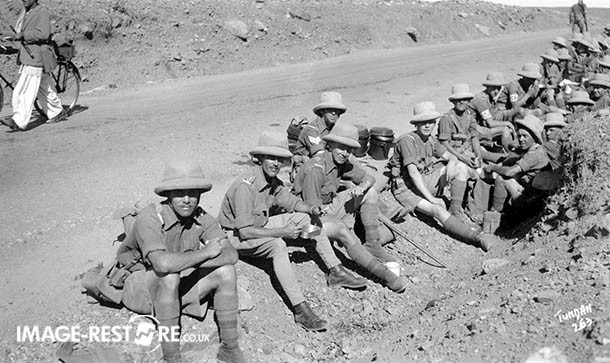 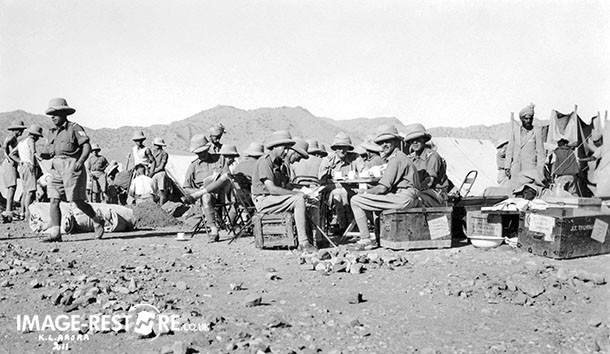 Tea time in one of the camps 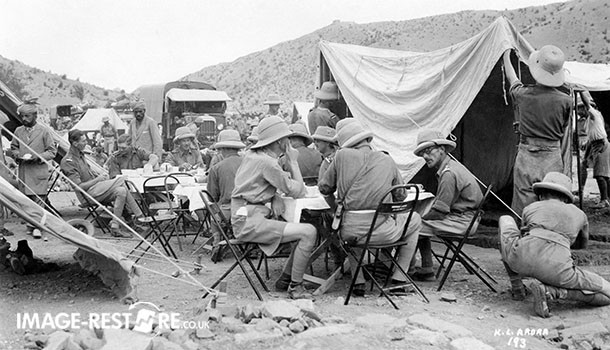 Tea time in one of the camps

In the above image, the British helmets bear the symbol “XV” which seems to derive from the British / Indian “XV Corps” who took part in the Burma Campaign which does not shed any light on why they on this long march! 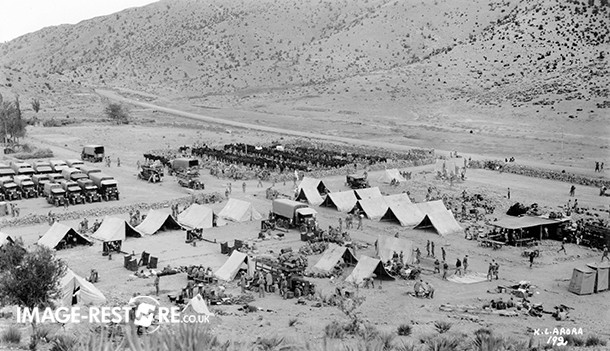 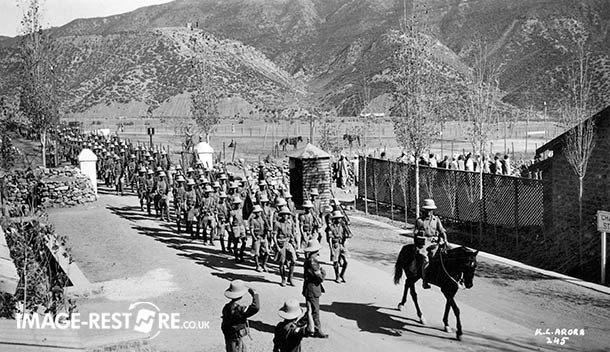 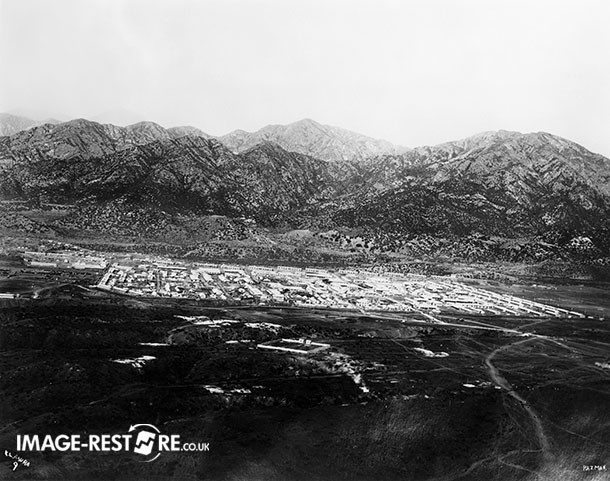 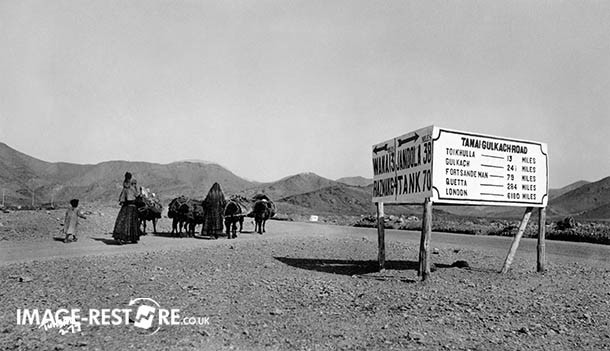 Signpost somewhere along the journey 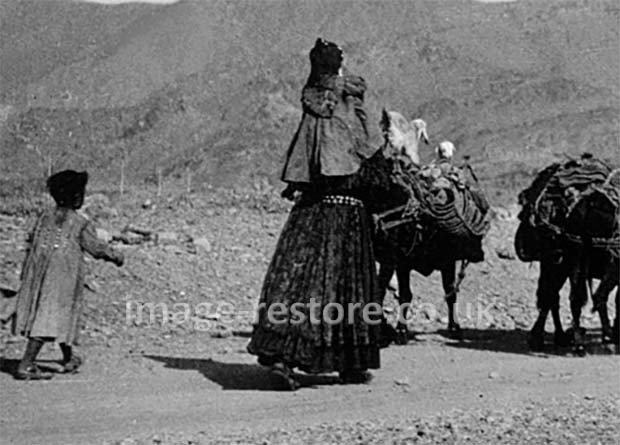 Also in the collection are these shots of Mari Indus Railway Station. Perhaps the troops started or eventually ended up here as the campaign ended? “66, a GS class 2-8-2 locomotive, was a product of the North British Locomotive Company in Glasgow, 22770 of 1931. It was delivered to the Kalabagh – Bannu Railway which had a branch to Tank. The bridge across the Indus was opened in 1931. In practice the line was operated by the North Western Railway of India, hence the NWR on the tender.  “ 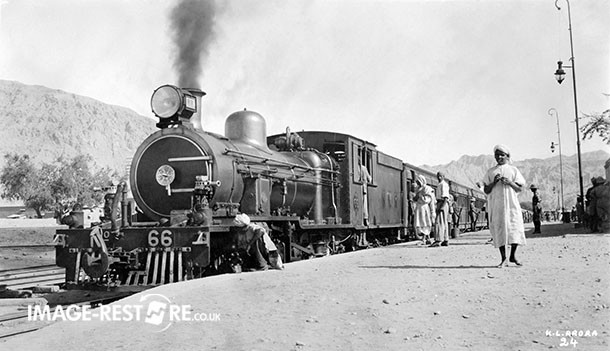 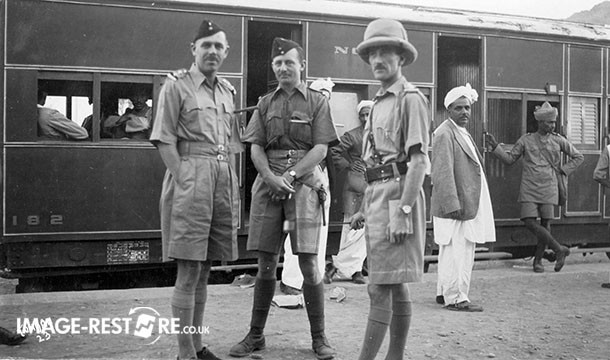 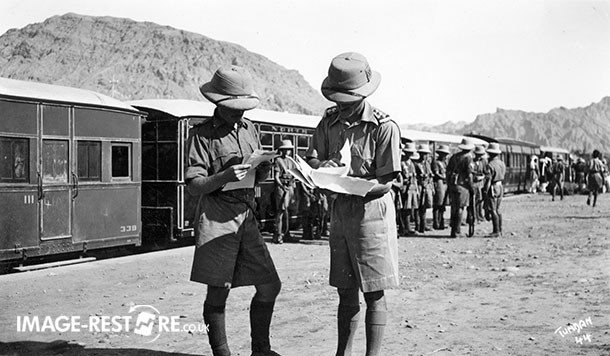 With thanks to Northampton Museums Flickr stream for help with identification. They seem to have a similar set of images taken on different days perhaps with different troop movements. Thanks to John Driver for use of his images.