The Wixon family in 1908, Mr Arthur Wixon and his wife Mrs Alice Wixon are shown below in a damaged photo. The oldest daughter’s in the photo was also called Alice.

Large families were common and the Wixon’s would go on to have 15. Sadly two died before they were eight. Kate Wixon died aged 4 of diphtheria in 1912 and Robert Wixon died also aged four in 1904. The second youngest of the 15 wasn’t born until 1921! Another sad tale from a very large family and of death and record-breaking can be found in the 1909 story of the record-breaking unicyclist 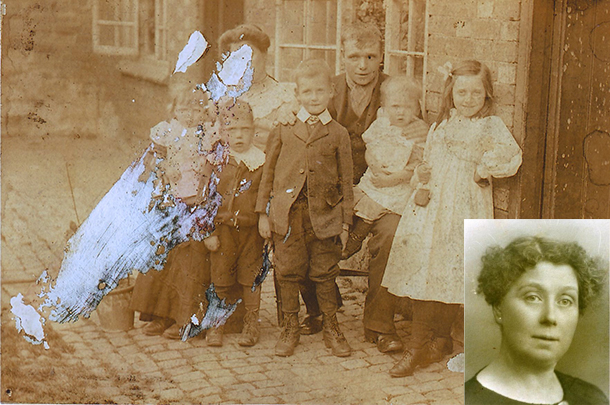 The restoration was made slightly simpler by another reference photo of Mr Alice Wixon.

The new face image was scaled, flipped and converted to black and white before setting the blend mode to darken and masked out. The mask was painted on to reveal the useful details to fill in the missing face. Great care was made in keeping the grain, focus and aged look to blend in all together.

The plant pot was recreated to left. This was done by finding a reference image of a Hydrangea leaf and making a custom brush from it. This was then used with the brush tools, including scatter, scaling and angle jitter to achieve random patterns of leaves that could be used to make a new plant. The pot was reconstructed with what little detail there was within the image. Everything was blended in. 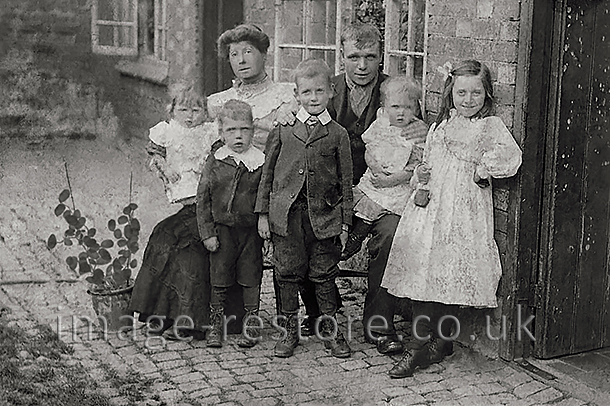 Arthur Wixon and Alice Wixon and their family 1908 restored.

TwitterFacebookBufferLinkedInPin It
Summary
Article Name
Rebuild and restore missing part of a photo
Description
The art of restoring a photo with missing pieces, is one in which patience and skill can help no end. This post explains some of the techniques used.
Neil Rhodes
Neil Rhodes