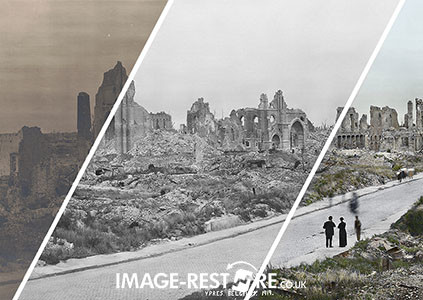 The 100th Anniversary of the 3rd Battle of Ypres also known as Passchendaele occurred in 2017. Every year on 11 of November we remember the end of the war and on the second Sunday, Remembrance Sunday we give thought to those who were lost in the conflict. This image is to remind us that life after War does not mean we forget. Images need not die along with the unfortunate. Old images can be restored and coloured and given new life and reborn into Ambient Images!

What is an Ambient image? – An ambient image is a restored and colourized image with an immersive soundscape and movement.

This image was sourced from the Library of Congress and proved a huge challenge to restore and colour. The sky was heavily set with stripes and lines and the image very blotchy and dark.

The image is huge at 11500 x 5000 pixels and the sky is the main issue. Producing a brighter image with more contrast involved using several copies of the main image. Each image was adjusted for the best level of contrast and brightness in areas of need. This produced a set of images that contained all the right tones that were blended together form a black and white. Smaller damage was then restored and any areas still out of balance were dodged and burned into line, which took the most amount of time to do.

The colouring of the image was first researched with existing images of Saint MartinCathedral and scrubland plants and grasses. Colours taken from those images and applied a layer at a time and painstakingly filled in, over the course of 10 days. I could not work from corner to corner the job was wholly monumental! Instead, I concentrated on small parts of the image and treated them like miniature scenes. Slowly I was able to link the scenes together and form a coloured image.

To form the final Ambient image, the images and soundscape were assembled in Camtasia Studio and layered together to form a sound timeline of events. I added zoom and pan to link these sound events to create the final composition.

To date, this is by far the biggest, single image project I have undertaken. It clearly shows that taking an old darkened image and turning it into an Ambient Image totally transforms its jaded historic patina. This creative approach with engaging sound and movement is great educational tool for museums and historical societies. A tool for those who require that extra special project for displays or commemorative events.  If you are reading this and would like to use this image in your display, please do get in touch for terms of use and a high-resolution version.

I hope you enjoyed this and if you want to see more, see my post on Ambient Images or to hire me to create your Ambient Image get in touch.