H.M.A. R34 was a British-engineered airship that entered service just after the end of WW1. With a design inspired by the German Zeppelin L33, brought down and captured on English soil in 1916, H.M.A. R34 was the first-ever aircraft to make an east-west transatlantic flight in July 1919 and, with the return flight, the first-ever two-way crossing.

To mark the 100th anniversary of R34’s historic flight and celebrate this significant achievement in British engineering history, I took it upon myself to restore and colour several photos of the airship and her crew taken from the Library of Congress collection. Together with the highly detailed log of R34’s journey by Brigadier-General A.M. Maitland, these images provide us with a fascinating reminder of the engineering skill and sheer determination that was required to succeed at a time when transatlantic air travel was far from routine. The size of the operation, the quantity of hydrogen required to fill the ship, the vast number of men required to moor and secure the ship and the length of time it took to complete the crossing are all truly mind-boggling and far exceed what we would tolerate today. 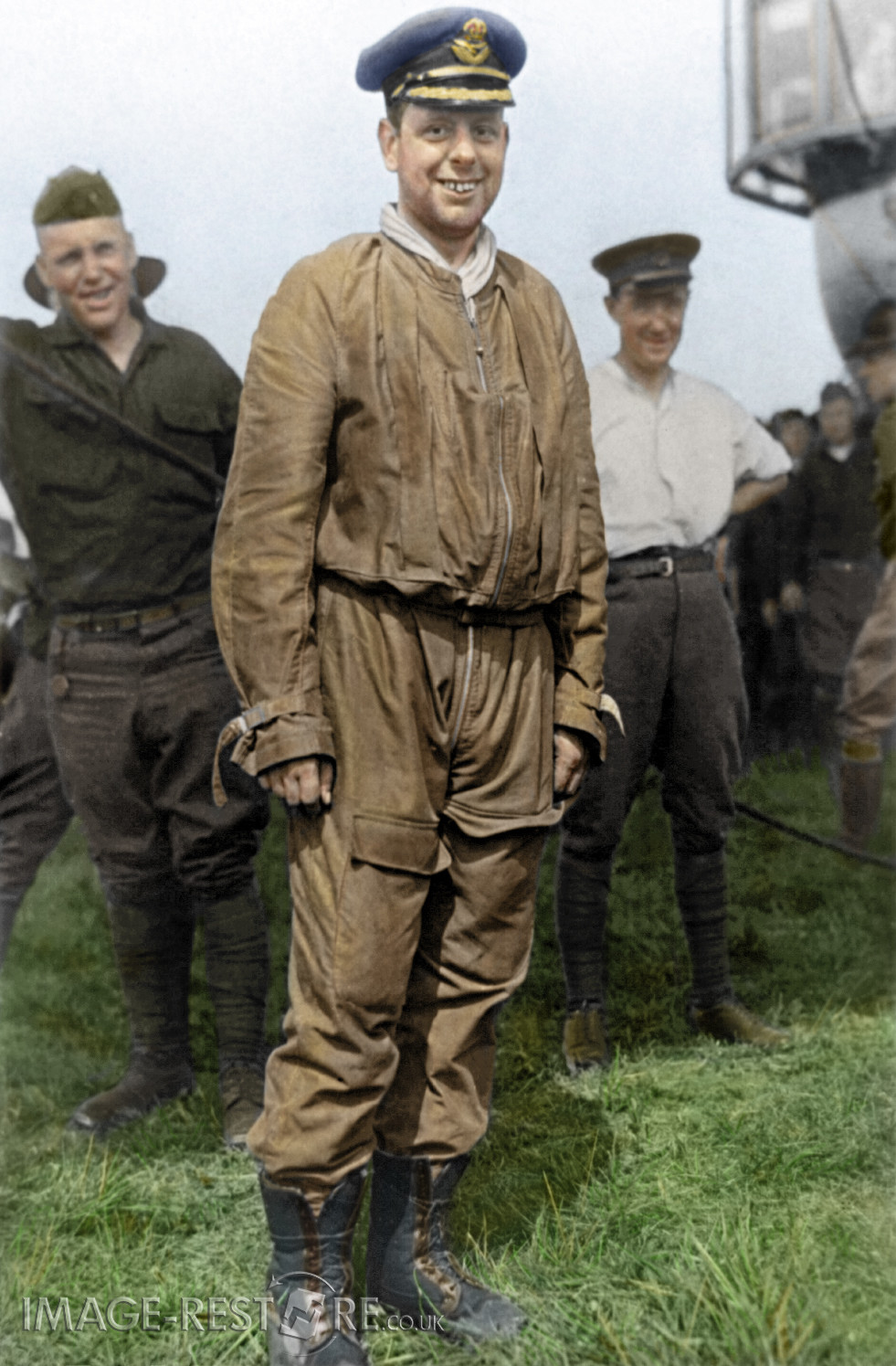 Major George Herbert Scott A.F – 25 May 1888 – 5 October 1930 –  in his flight suit after commanding the R34 British Airship across the Atlantic and landing safely at Mineola, Long Island United States on the 6th July 1919 – colourized.

R34 took off from East Fortune in East Lothian, Scotland, on 2 July 1919 and arrived at Mineola, Long Island, the United States on the 6th July after a flight of 108 hours, with virtually no fuel left. “As the landing party had no experience of handling large rigid airships, Major E. M. Pritchard jumped by parachute to assist with the mooring of the ship. In doing so, he became the first person to reach American soil by air from Europe.” – Wikipedia. 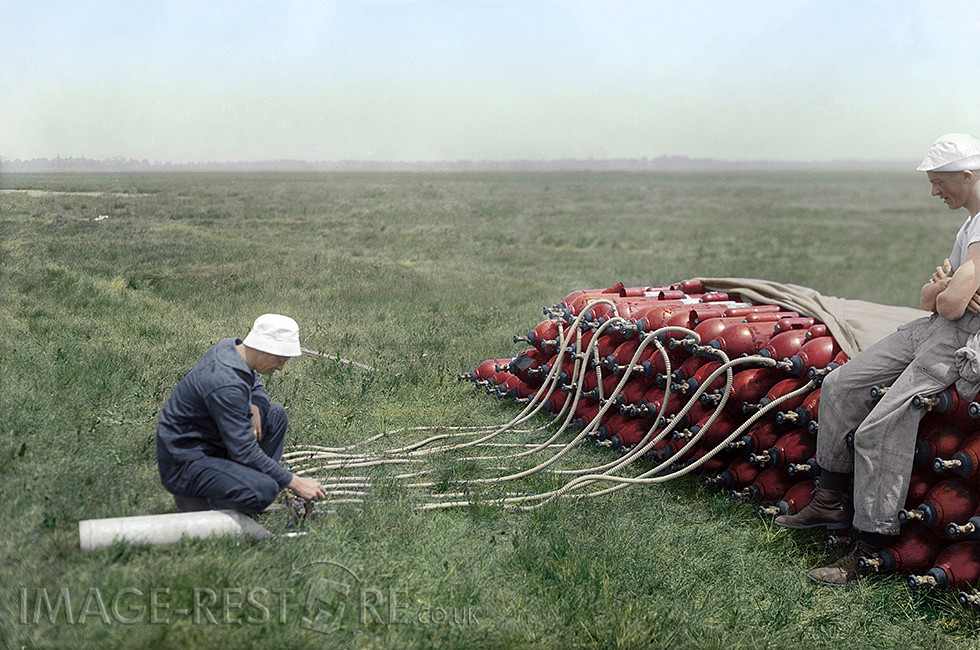 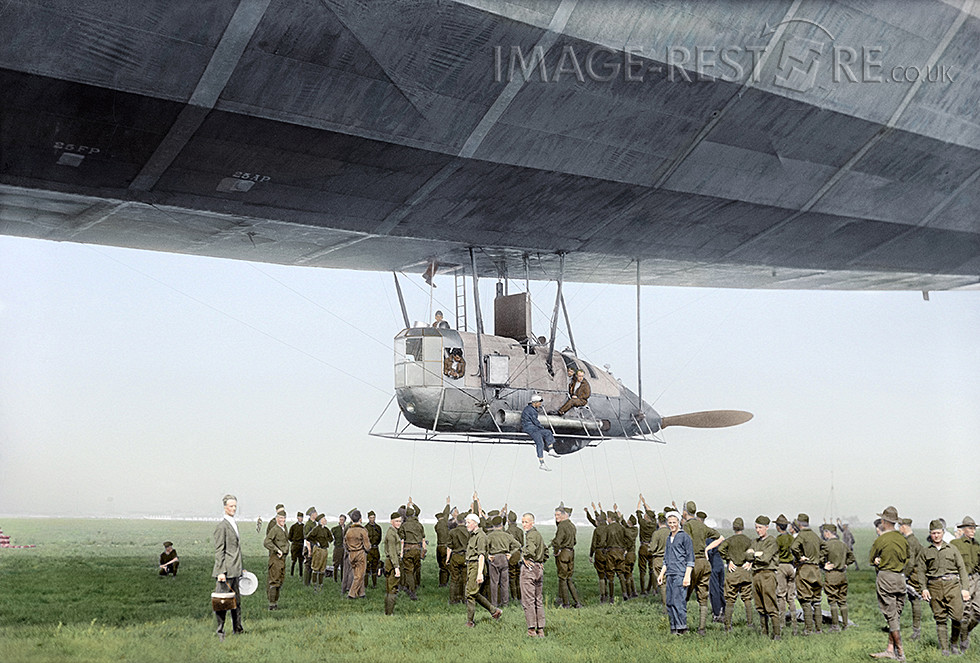 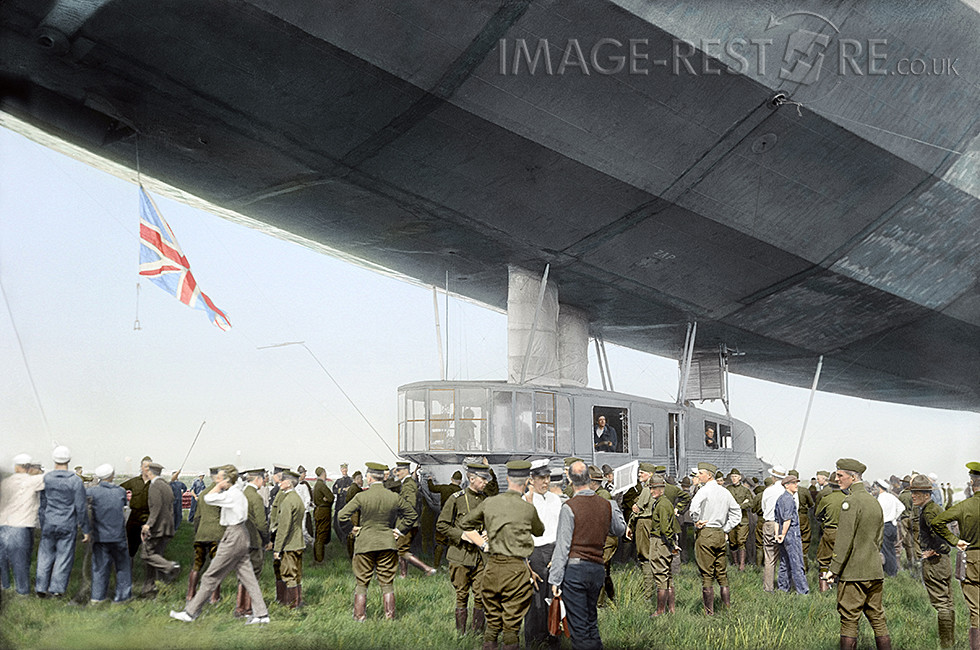 After filling with huge amounts of hydrogen, the airship took off from Mineola at 11:54 pm on July 10th 1919. After a quick gratitude flight over NewYork city for a final farewell, the R34 returned home. With a brisk tailwind, the ship reached England in 3 days and just a few hours. The only major event is detailed below in a log entry.

“FRIDAY, JULY 11th 3.20 a.m. Position 45 03′ N., 42 57′ W., estimated by observations of stars to sea horizon. 4.20 a.m. The foremost of the two engines in after car is out of action: damaged beyond repair. 1. Scott and myself discuss the situation and agree we had better make straight for our base at East Fortune, and give up the idea of flying in over London.  The cause of this breakdown turned out to be accidental declutching whilst under load, allowing the engine to race. For some unexplained reason, the governor gear failed to operate.”

All images were originally sourced from the Library of Congress image lot 10849. It was important for me to ensure that all colours were as accurate as possible. Sources included museums, excerpts from the press at the time of the event, and contacts in the army.

Whilst every care has gone into making these images as correct as possible, a certain amount of artistic license was required where information was missing or unavailable.

If you are a Historian, Museum or Historical Society and are looking for some unique content or help with a project please see my Special Projects page for more information and how you can hire me for my specialist imaging services